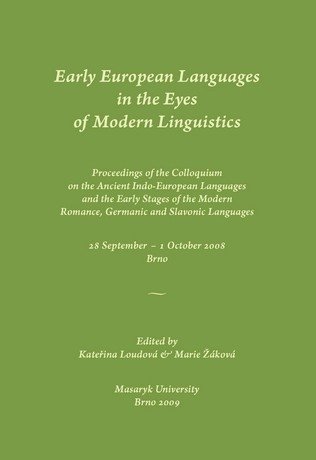 Early European Languages in the Eyes of Modern Linguistics

Proceedings of the Colloquium on the Ancient Indo-European Languages and the Early Stages of the Modern Romance, Germanic and Slavonic Languages. 28 September – 1 October 2008, Brno

The papers included in this volume were presented at the international conference 'Early European Languages in the Eyes of Modern Linguistics' organized by the Centre for Interdisciplinary Research into Ancient Languages and Early Stages of Modern Languages at Masaryk University in Brno. The sessions of the four-day colloquium covered topics ranging from Latin and Greek, early Romance, Germanic, and, last but not least, Slavonic linguistics. More than fifty papers were delivered by linguists from renowned European universities as well as by linguists working at the Centre for Interdisciplinary Research in Brno. The volume contains a selection of papers read at the colloquium that were for the present purpose reviewed by two external referees.