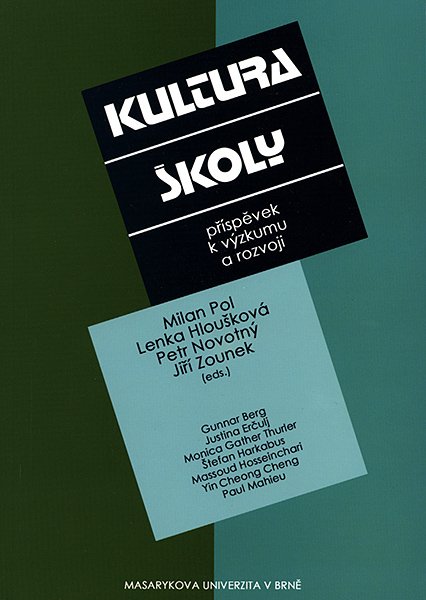 This publication is focused on the issue of school culture. In the opening part, a team of Czech editors present the results of their detailed research of the culture of Czech schools, performed in 2001-2003 at basic schools (pupils aged 6 to 15) in the Czech Republic. The genesis of the term school culture is described, a classification of the purposes of school culture studies is offered, and a variety of findings about the functioning of major areas of school life at Czech basic schools is presented, with particular regard to the manifestations of school culture. The general level of knowledge is enhanced by a case study of the culture of a provincial basic school. Following are seven texts by authors from various countries of Europe and Asia, all of them authentically experienced in the research and/or development of school culture, founding their contributions mainly on the real life in their home countries. From the educational viewpoint, these are highly varied environments from those where schools endeavour to allow quite a wide range of liberties of their development, to those where the framework of their own development is rather limited. Some contributions come from countries of similar developments in the last decades (Slovenia, Slovakia, also interesting in comparison to the Czech milieu), some are from countries of more continuous stability (Belgium, Sweden, Switzerland), and some have originated in distinctly different cultures (Hong Kong, Iran).