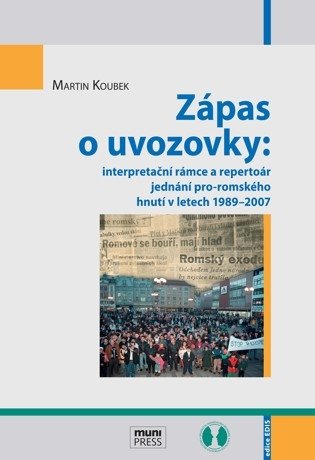 Title in English: The struggle for quotation marks: Interpretative frames and collective action repertoire of the Czech Roma movement after 1989

The book describes the development of interpretative frames and framing processes of Roma and pro-Roma activists in the Czech Republic after 1989. Using micro-discursive frame analysis it shows how diagnostic, prognostic and motivational framing varies in relation to changes in integration policies, the level of racist, extreme-right or anti-Roma speeches and manifestations, public debates, and opportunities in fundraising over the four years examined (1992, 1997, 2002, 2007). Complementary protest event analysis is used to describe the interaction between activists´ discursive strategies and their collective action repertoire. The book shows that the dominant framing in cultural and political field prevalent in 90s shifted into frames of Roma as aid beneficiaries within the socio-economic field. This shift seems to have an effect also on the form of collective mobilization of the Czech pro-Roma movement.