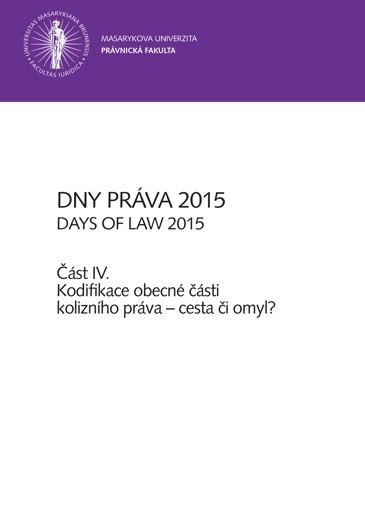 Private International Law not only in the Czech Republic and in other EU Member States, but also in third countries, has in recent years undergone various changes. In particular the EU regulation plays a key role in this development because it has unified the legal regulation of a number of issues relating to private law relations with an international element and it has also represented a model of possible regulation for third countries. Legal acts containing both procedural and conflict-of-laws regulation were created. The development at the EU level represented also one of the reasons which led the Czech legislator to the adoption of new Private International Law Act. The EU regulation, however, does not cover comprehensively the general part of Private International Law, particularly general issues of conflict-of-laws method, such as qualification (classification), interpretation, renvoi, treatment with foreign law and others. These issues remain subject to national regulations which may significantly differ. The problem of connecting the different national regulations of general issues with existing EU regulations is a challenge. There is also the question of possibility and suitability of unification of these issues in the EU. This section should be therefore devoted to general issues of conflict-of-laws method (in particular to qualification, renvoi, preliminary questions in Private International Law, treatment with the applicable law, public policy, overriding mandatory rules). Papers dealing with the development of these issues, their regulation in Czech Private International Law Act and/or in other legal orders including the comparison as well as the papers concerning the suitability and necessity of unification in this area are welcomed. The papers should not deal with the analysis of legal regulation of particular relationships with cross-border element.