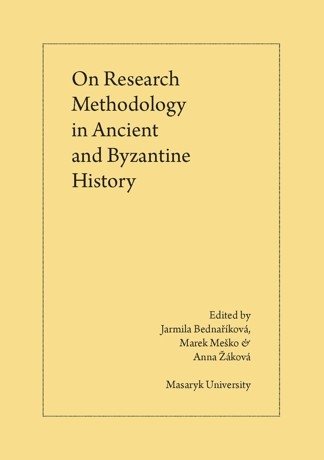 On Research Methodology in Ancient and Byzantine History

This monograph written by a collective of authors contains 12 contributions focused on different fields of research methodology in ancient history. On the one hand its focus is very general, but on the other hand it becomes very specific given the specialization of each author (since most of the authors are doctoral students, their focus is naturally influenced by their dissertation research topic). The main contributions (by J. Bednaříková and M. Meško) are by and large dedicated to the characteristics of an “ancient state” and the characteristics of the so-called sacral kingship (with an emphasis on its existence during Antiquity). They also address the definition of the basic features of the so-called Germanic barbarian states, which are compared to the entity called Attila’s empire. In addition, the papers propose to include also those state units among the states of the ancient type which are not covered by the traditionally defined period of Antiquity, yet which have identical features (and so is the case with the category of a “barbarian state”). They also discuss the mechanism of diplomatic relations between nomads and Byzantium and seek the characteristic features of a nomadic state in general and nomadic political units in the 11th and 12th centuries separately. The rest of the publication consists of shorter papers by doctoral students of Ancient History. It focuses on the methodology of work with ancient literature as a source of information about ancient times, the methodology of examining the transitional periods of history, environmental problems in antiquity and economic history of Late Antiquity, a critical approach to sources allowing a researcher to address the question of lawful or unlawful acts of the Principate emperors, the question of the use of epigraphic monuments to solve the problem of the so-called Athenian imperialism. It also includes papers dealing with the phenomenon of early medieval Hispanic chronicles and the problematics of the examination of Early Roman and “barbarian” history. The collection thus presents more general as well as specific problems which can be encountered in the terminology when studying Antiquity, in the breakdown of the period, when creating comparative analogies, teaching ancient history and working with a variety of ancient sources.