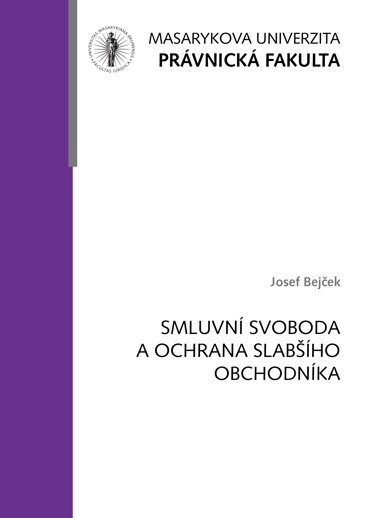 Title in English: Freedom of Contract and Protection of a Weaker Businessman

The book concerns an analysis of normative and judicial interventions into the freedom of business contracts being concluded in a situation of unequal position of the parties and of an alleged economic dependence. Formal equality of the parties to a business contract may be often illusory. Legal interventions are quite often based on unsubstantiated assumptions of information asymmetry or economic dependence between the entrepreneurs. Legal protection of the allegedly weaker party may sometimes be transformed into the discrimination against the originally stronger party and it may be detrimental to the competition and to the consumer. This occurs e.g. by the price regulation, by the antitrust laws, by regulation of economic dependence and by administrative and judicial decisions. The study works on the presumption that the principle of equality is substantiated in private law relations and that the protection of a weaker party should be merely a well reasoned exemption from that rule. Possibilities and limits of public law interventions into relations named as „economic dependence“ will be dealt with. Significant and relevant legal provisions of several countries will be compared and assessed; Czech legal regulation will be discussed in this context and conclusions in terms of normative measures, interpretation and practical use of recent regulation will be drawn.