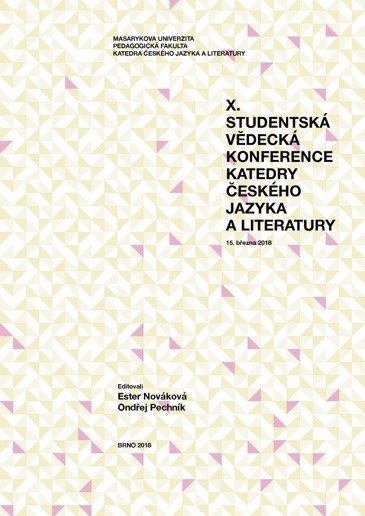 The publication presents contributions from a scientific conference, which was attended by bachelor, master and doctoral students on 15 March 2018. Two contributions deal with teaching Czech language as a foreign language (Jesika Oulehlová: Internationalism of Greek Origin and Alena Novotná: Common Mistakes of Pupils with a Different Mother Tongue in the Greek School in Greece), one contribution is devoted to the issue of communication (Miroslav Jindra: From the Stage to Auditorium ... /and back/. On the issues of communication with the theater stage with children's viewer), others are focused on literature for children and youth (Jitka Pušová: The Picture of Rural Reality in the Literature for Children and Youth between 1945–1999, Marie Drábková: Translations of Soviet literature for children and youth in the production of the State Publishing House of Children’s Books in 1949–1959) and the literature written by children (Anna Hronová: Juvenile authors and their representation in the Czech literature between 1989–2015). The publication is concluded by papers oriented to literature for adults (Kristýna Klejdusova: Jirasek’s drama Father – analysis of characters and motifs in the context of the general trends of the Czech theater of the 1990s and Ondřej Pechník: Thematization of exoticism in Czech prose after 2000).