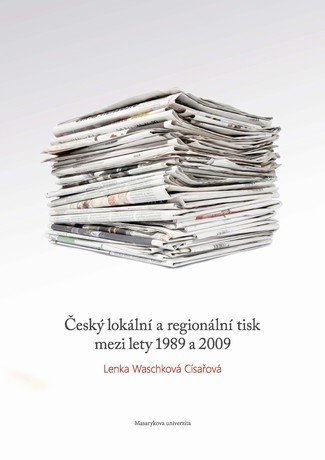 Title in English: Czech local and regional press between 1989 and 2009

The fall of communism in 1989 brought major social, political and cultural changes in the Czechoslovakia. This book concentrates on changes in one particular segment of the media market, the subsystem of local and regional print media. This segment of the media landscape is rarely studied although – arguably – it is a significant part of the media system, particularly as it enables strong identifications at the local/regional level. Czech local and regional press has been the centre of attention in relation to the entry of foreign owners on the market and particularly in relation to issues of possible media concentration on this segment of the market but concentrated academic study of this subject is seriously lacking. The text aims at mapping structural changes that characterize this segment of the media market between 1989 and 2009. It analyzes political and economic factors that played a role in the transformation and identifies commercialization as a major influence. The book makes use of three research methods: document analysis, semi-structured in-depth interviews, survey and content analysis. The analysis operates at two levels, those of the media system and the media organization and it uses a case study approach for an in-depth analysis of the case of the Vltava-Labe-Press (VLP) publishing house that has become dominant on the Czech local and regional print media market. The main hypothesis that the book addresses is that the influence of commercialization (and its constituting elements on the macro and micro levels) within the transformation process leads to the gradual erosion of the local characteristics (a process we term delocalization) of this particular segment of the media system. At the macro level of the media system we conclude that regulation did not curb the influence of the constitutive elements of commercialization; that privatization in fact contributed to the development of ownership concentration and that the Vltava-Labe-Press publishing house established a monopoly on the Czech local and regional press market. At the micro level we arrive at the conclusion that the structure of the Vltava- Labe-Press publishing house and content of its selected dailies lost its local characteristics.