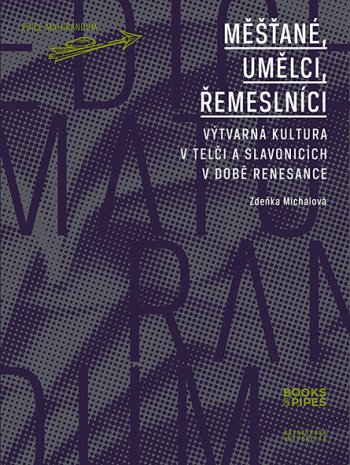 Title in English: Townspeople, Artists, Craftsmen. Artistic Culture in Telč and Slavonice during the Renaissance

The monograph, which is focused on Telč and Slavonice, strives to provide a complex image of the art production in aristocratic cities at the beginning of the early modern period and, from various points of view, examines the role of the townspeople in the creation of artworks. Townspeople acted as patrons of decorative programs for sgraffito facades and wall paintings in the interiors of townhouses, they owned objects made of precious metals, bought works for churches and had tombstones and epitaphs created for their families. Many of these craft and art commissions reflected the changes in the religious situation during the 16th century when works created in the context of the Reformation acquired different meanings than the art produced in the Catholic community. Surviving works from the crucial period of the second half of the 16th century can even reveal traces of conflict between the Catholic aristocracy and the townsmen belonging to the Lutheran faith. The creators of the artworks in question can also be found directly among the cities’ inhabitants. The Italian builders, Austrian stonemasons and local creators taking part in the art production represent a diverse company of artists and craftsmen who, together with their patrons, gave Telč and Slavonice their Renaissance appearance.