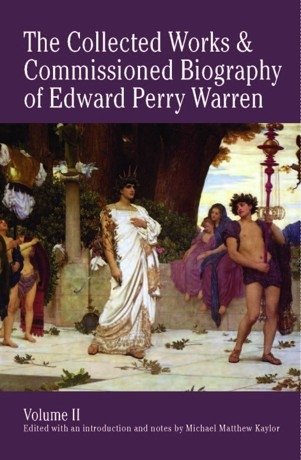 Two volumes provide scholarly editions of Edward Perry Warren’s works (all, save one, never before re-issued), augmentedby a biographical introduction, extensive notes, translations, illustrations, and appendices. For the first time, Warren’s voice is heard in full—through his correspondence and other residues that constitute his commissioned Edward Perry Warren: The Biography of a Connoisseur, through his conversation, captured in Osbert Burdett’s An Imaginary Conversation, through his novel A Tale of Pausanian Love (published here for the first time) and his collection The Wild Rose: A Volume of Poems, through his fairy-tale The Prince Who Did Not Exist and his scholarly article The Scandal of the Museo di Villa Giulia, through his pamphlet Classical & American Education and his retelling of three Greek legends in Alcmaeon, Hypermestra, Caeneus, and through his magnum opus, the apologia A Defence of Uranian Love.