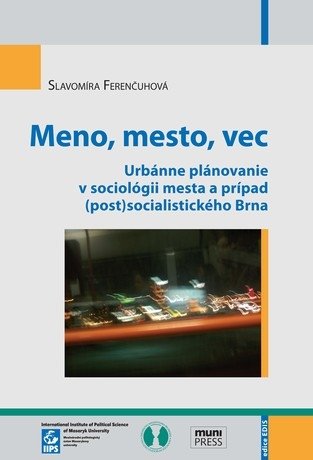 Title in English: Name, city, object : Urban planning in sociology and the case of (post)socialist Brno

The book aims to introduce urban planning from the perspective of urban sociology. It attempts to find out why urban planning is so seldom studied in sociology, points out the interconnections between the two disciplines, and gives arguments for a more substantial research on planning in urban sociology. The primary focus of the second part of the book is on studying interconnections between historical transformations of urban planning – its principles, ideas and praxis – and social change. This question is further developed on the case of the city of Brno and its planning in the period of state socialism and after its collapse in 1989. The analysis of the planning concepts prepared for Brno in 1951, 1966, 1973, 2002, and 2007, serves as the ground for discussing the current knowledge about urban planning in (post)socialism in the cities of Central and Eastern Europe, as the findings point out not just changes, but also continuities in ideas, practices or projects prepared for Brno in the past 60 years.