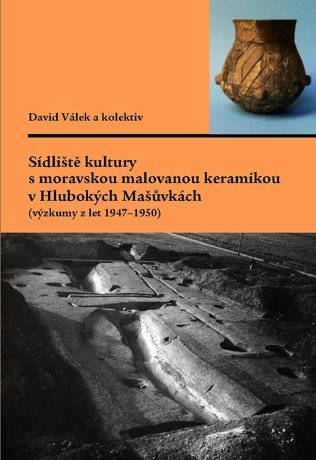 Title in English: The Settlement of the Moravian Painted Pottery Culture in Hluboké Mašůvky (research in 1947–1950)

The Neolithic settlement in Hluboké Mašůvky (Znojmo district), situated at the "Padělky" and "Nivky" locations, is one of the most important sites of its kind in Moravia. This work presents the outcomes of the long-awaited assessment of rich archaeological evidence (pottery, stone industry, animal bones) of the Moravian Painted Pottery Culture from post-war research (1947–1950) confirming two stages of the settlement at the location, in phase Ib (fortification) and later in phases IIa/IIb. Relative chronology is based on ceramic artefacts the classification and assessment of which, including multiple illustrations, have been among the chief objectives of the study. An overview of research activities on the site accompanied by a number of previously unpublished period plans and photographs is another important contribution of this work.